Kids in the Word: Gideon

Last week we learned about Gideon, and Jonathan was equally enthralled with this story as he was with Joshua. I suppose there's something about boys and soldiers!


Jonathan's toddler Bible only covered a small portion of the story of Gideon. Therefore we used some books to help supplement and tell the story better. These two books were the basis of our lesson this week:

This is another book from the Bible Time series that we recently discovered. It covers all aspects of the story of Gideon: Gideon's call, Gideon's fleece, reducing the size of Israel's army, and God giving Israel the victory. We divided the book up into three readings and this seemed to work well for Jonathan.

Hurray for the Lord's Army! by Mary Manz Simon

This was Jonathan's favorite. This book covers the story of Gideon, but leaves out Gideon's wanting a sign from God. It's an easy reader story, but full of action. Jonathan loved pretending to blow a trumpet and shouting "A sword for the LORD and for Gideon!". He was so cute! Jonathan requested this book several times throughout the week.


We learned the song "I'm in the Lord's Army!" along with the actions. Jonathan even taught this song to his Sunday school class on Sunday!


I looked and looked for a toddler-friendly Gideon craft, but I couldn't really find one. So, thankfully God gave me an idea. Jonathan loved shouting "The Sword of the LORD and of Gideon!"-- so I used that to make a craft: 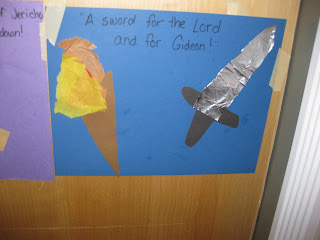 I cut out the base of a sword from black paper and the base of a torch from brown paper. Then I had Jonathan glue them down onto his paper. For the torch, we ripped yellow, orange, and red tissue paper and glued them onto the base to make "fire". For the sword, we used aluminum foil to make a blade. This really helped Jonathan remember our lesson and he was so proud to show his artwork to daddy!

Now we're moving on to Ruth... we're just zipping through the Old Testament!

Oh Gideon will be fun when we get to it.

We love Cedarmont kids... and the boy that does that song is so cute! Great craft. Very boy friendly (although I'm sure girls would like it too;)

I love this book on the 10 Commandments. I put it on my wish list. Very creative with your Gideon crafts - nice!

This is great! We have just started doing the story a week thing and I think it's a great idea. will have to keep an eye on what you get up to for ideas!

Hi there! I am visiting via ABC & 123 and am delighted to have discovered your blog! I am currently working on a weekly Bible story/biblical character traits program for my little ones, and you have lovely ideas - I'll be back for more!! Love your Gideon craft!

Amanda
Christian. Wife. SAH Momma of Jonathan (3) and Grace (1). I also work part time for our church's children's ministry. My life is busy and blessed!

Choose Your Own Adventure!